Putting Wales on the Map

Shortly after the Great Fire, King Charles II employed a Scotsman called John Ogilby to map the streets affected by the blaze and to assess the damage. Ogilby then went on to survey the roads of England and Wales — from London to Monmouth via Abingdon, London to St David’s, Chester to Holyhead and Chester to Cardiff to name but a few of the 100 routes illustrated in Britannia, the first road atlas ever published in 1675.

Certain aspects of these 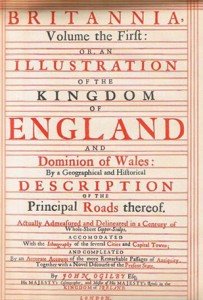 maps are familiar — many 17th-century highways are main roads today and Ogilby used a scale of one inch to the statute mile. But unlike modern maps, he portrayed the roads as strips, generally six to a plate (see illustration). Some indicate castles, some show the location of inns, mills, mines and even a gallows while others have few or no landmarks.

Spelling was not standardised and in Wales, in particular, they are a result of surveyors from London misunderstanding the local accent and language. Thus, phonetically the route from Chester to Cardiff is recorded as passing through Bealt (Builth) and the Brecon Beacons below Cribyn and Fan y Big and entering Glamorganith (Glamorgan) at Pont Stucketh (Pontsticill).

We know from the preface that Ogilby used  a “waywiser” or measuring wheel rather than a surveyor’s chain,” says Dr Derek Bissell whose talk this month will focus on the maps in Wales and  the Marches. Each strip carries a compass rose and hills are shown by drawings. Where these are the right way up, the route is uphill. Where the hill appears inverted, the route is downhill. “Interestingly, this system works in the reverse journey directon if the map is used upside down,” he says.

Abergavenny appears in Plate 77, Monmouth to Llanbeder (Lampeter). In the 17th century, the route from Monmouth would have gone via Coed Glas, formerly called Rope Walk Lane, and entered the town at Lower Monk Street. After passing what is now the war memorial, the road to Brecknock continued along St Michael’s Road and, until the railway embankment and station were built, it  joined the current A40 under the Old Station Surgery.

Dr Bissell’s talk: John Ogilby’s Roads in Wales and the Borders at the Borough Theatre on January 19th starts at 7.30pm. Doors open at 7pm. Non-members may join on the night.