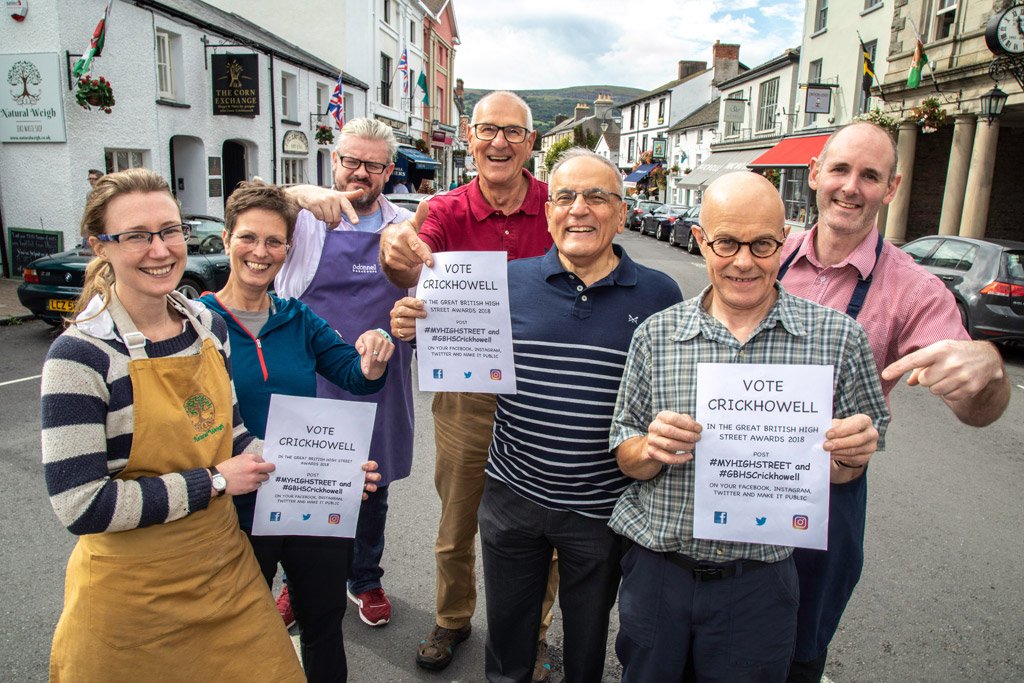 Crickhowell High Street has been shortlisted for a national award. It’s one of only four towns in Wales to go forward to the finals of the Great British High Street Awards. If Crickhowell wins the Wales category, the town could receive £5,000 to spend in the community with an additional £10,000 if it is judged to be the UK Champion.

A team of judges will visit Crickhowell in October to judge it against 25 other towns in the UK and 30 per cent of the score will be based on a public vote on social media – so local people are being urged to support Crickhowell by posting on their Facebook, Twitter and Instagram pages. Simply post using #MYHIGHSTREET and #GBHSCrickhowell to register a vote.

Crickhowell was entered for the awards by the team behind The Corn Exchange project – which converted the former High Street pub into shops and flats after the town rose up to stop a supermarket being built there. Corn Exchange Crickhowell Ltd (CECLtd) Managing Director, Dean Christy, said: “To be judged one of the four best High Streets in Wales is something to be immensely proud of. Crickhowell is unique in that it has no national chains in its High Street and only one – Boots – in the town centre. By backing the Corn Exchange project, the people of Crickhowell made it clear that they wanted to keep it that way. The courage, determination and support for our High Street shops has been recognised by the organisers of The Great British High Street Awards. Hopefully it will be recognised by the final judging panel as well.”

CECLtd’s Communications Director, Tim Jones, said: “With 30 per cent of the score based on public support, it is vital that people vote for Crickhowell High Street. If you voted before, please vote again, this is a different round and every vote counts.”

Tim said: “ When we entered, we wanted people to recognise the contribution made by so many people who help keep Crickhowell vibrant – be that the shareholders who bought The Corn Exchange, businesses which aren’t on the actual High Street but which are a major draw for visitors and other bodies like the Crickhowell Resource and Information Centre and the Crickhowell Walking Festival and Literary Festivals.”

The Corn Exchange team have decided that, should The High Street win, a committee representative of the town will be set up to allocate the prize money according to the competition rules and in the spirit of the Great British High Street Awards. They will ask for costed proposals with a named individual or body designated to carry them forward.

Dean Christy said: “We have achieved so much already by working together, we need to do so again to be in with a chance of securing prize money which could make a big difference to what is already a great town.”