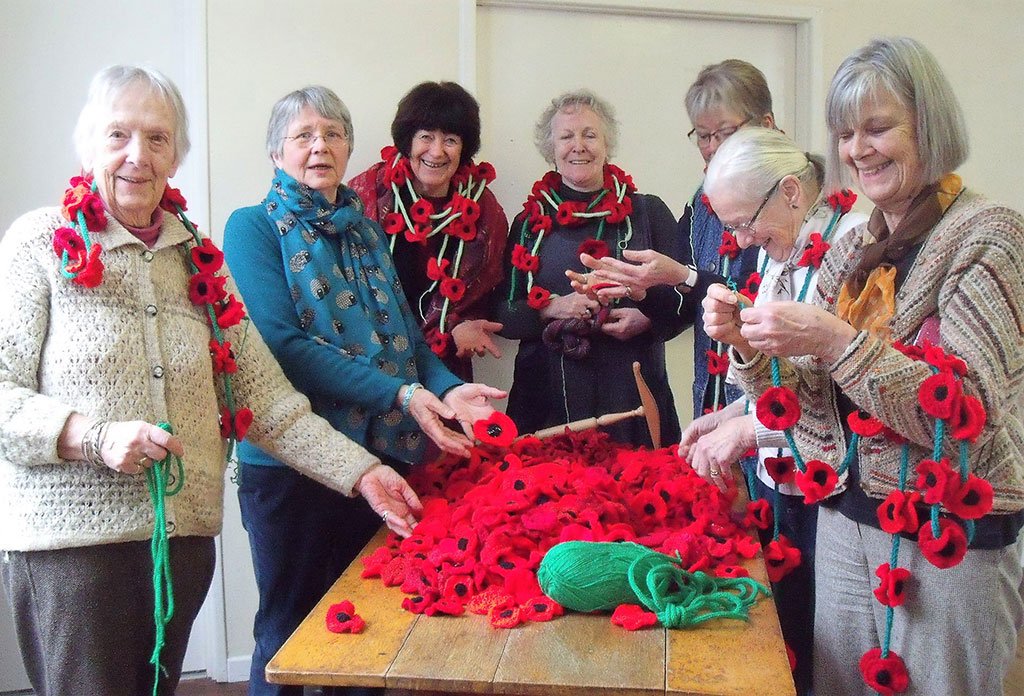 Abergavenny sheep farmer Olwen Veevers is up to her eyes in poppies this month as parcels of the knitted and hand-made textile flowers pile in from thousands of knitters and fibre fans from all over the UK and abroad.

So far, 40,038 poppies have been sent in support of an appeal by Wonderwool Wales, the annual showcase of Welsh wool and natural fibres, which will be staging a massive, commemorative WW1 installation at the Royal Welsh Showground, Builth Wells on April 28 and 29. Donated poppies will be strung together into a ‘Curtain of Poppies’ which will be displayed in Hall 3, where The Royal British Legion will have a stand and collect donations. The commemorative project, launched at the 2017 show, has encouraged today’s community of knitters to recreate the united determination of the women at home during World War 1, who “did their bit” to support the troops overseas by knitting gloves, scarves, balaclavas and socks.

Curtain of Poppies organisers, mother and daughter Olwen and Jane Veevers are delighted at the way the project has caught the imagination of schools, knitting groups, craft groups and individuals.

Olwen, a coloured sheep breeder and needle felt artist who farms at Cross Ash near Abergavenny said: “The poppies are now coming in thick and fast – at a rate of about five parcels a day. Some of them are already strung together but we’re also getting thousands that are unhitched, so the Bridstow Spinners in Ross on Wye deserve a huge thank you. Not only have they helped us by making poppies, now several stalwarts are working furiously behind the scenes to sew thousands more onto cords!”

Organisers are continuing to accept poppies until the end of March. Jane said: “A big thank you to everyone who has supported this project and to those of you who are still working on your poppies, please send them in as soon as you can. It would also be wonderful if as many of you as possible could come along to the show to see the result of your efforts.”

After its launch at Wonderwool Wales, A Curtain of Poppies will become a travelling exhibition. See it at Powys County Council County Hall during May and the National Wool Museum of Wales from May 26 until the end of June. It will then be on display at the Gower Heritage Centre during July and August, the Newtown Textile Museum during September and next year (2019) it has been offered a permanent home at the Gower Heritage Centre.
Wonderwool Wales is inviting monetary donations in support of this project for the Royal British Legion. www.justgiving.com/fundraising/Wonderwool-Wales-Curtain-of-Poppies