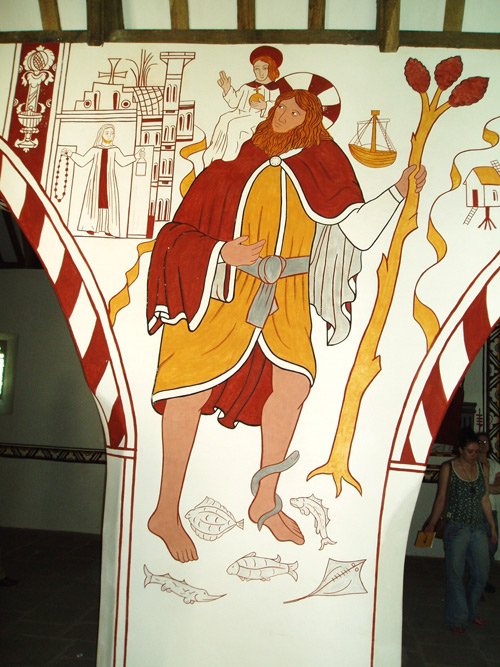 Churches before the Reformation were a riot of colour. Helen Morgan from Abergavenny Local Society reports

Far from being whitewashed havens of tranquillity, church walls throbbed with images of saints and angels. In the early 1500s, churches might have been plain on the outside but inside they would have been rich with wall paintings, statues, elaborate wood carving and stained glass.

And they had a purpose. Scenes from the Bible were a way of teaching a largely illiterate population what they should believe and how they should live their Christian lives. Lives of the Apostles and other saints showed how they had died for their faith. Symbolic pictures with strong moral messages would hammer home ethical teachings.

The fundamental message then — as now — was salvation, i.e. that Jesus came to earth to save sinners. For this reason many murals concentrated on the story of Christ with the final event, the Last Judgment, typically located above the chancel arch.  The only surviving example in Wales is in Wrexham where a newly risen Christ is seated on a rainbow flanked by saints and angels carrying emblems of the Passion.

Saints had their uses, too. In areas where congregations depended on rivers or the sea for their livelihood, parishioners would pray to an image of St Nicholas, patron saint of sailors. Pregnant women hoping for safe delivery would offer prayers to St Margaret while St Roche was the saint who helped to protect the population from the Plague.

Of all the saints, however, St Christopher, protector of travellers, was the one universally depicted. An elaborate example of St Christoper wielding a huge staff and carrying the Christ-child across a fish-infested river can be found at Llantwith Major.

At St Teilo’s (now moved to St Fagans museum), St Christopher was one of the most badly damaged paintings in the original church. The image was clearly a key part of the decoration, facing the main entrance to the church, so that the faithful could look in without even having to enter the building. But why was St Christopher so significant? “Nowadays he is the patron saint of travellers, but in the Middle Ages he was the saint who looked after you on your most crucial journey — the journey to the afterlife,” says Dr Madelaine Gray.

Dr Madelaine Gray’s talk on Medieval Murals at the Borough  Theatre on March 15 starts at 7.30pm. It replaces the advertised talk by Gerallt Nash who is indisposed. Non-members may join on the night.