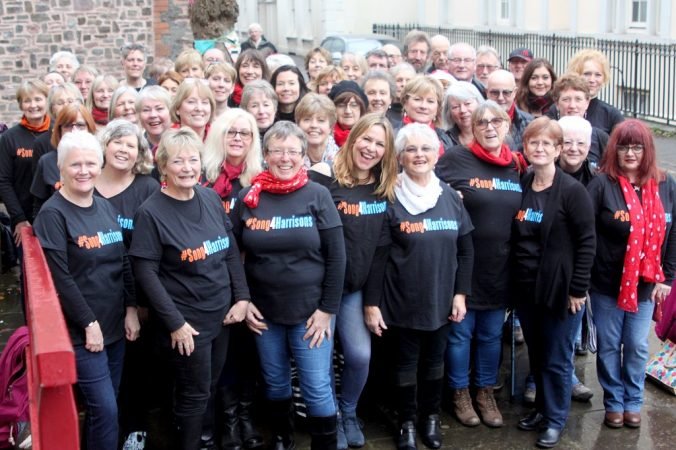 On 2nd February, The Alive & Kickin‘ Community Choir Brecon launched its very own charity single and video; Lay Your Head On Me.  The song was written by choir leader, Tanya Walker for Harrison’s Fund, a charity aiming to fund pioneering research into a cure for Duchenne Muscular Dystrophy. Duchenne Muscular Dystrophy is the most common fatal genetic disorder in children and affects 1 in every 3500 births.

It all began in 2014 when two brothers, Oskar and Theo, then 3 and 1 years old, were diagnosed with Duchenne Muscular Dystrophy. Their aunt, Ros Sandhu, a member of the Alive & Kickin’ Community Choir Brecon at the time, told the choir leader Tanya Walker about the two little boys, and the choir felt that they wanted to do something to help.

Tanya set about composing Lay Your Head on Me along with local producer Gary White, with the intention of aiding Harrison’s fund and finding a cure for Duchenne Muscular Dystrophy.

Tanya says, “Because of the subject matter and it being such an emotive subject (and as I have a child who is even now only eight years old), it did take me ages to start writing the song. I was afraid that it couldn’t represent the complex emotions someone must feel after discovering your child has a terminal illness such as Duchenne. And then one day I was inspired by the story of a woman on Radio 4 who was reading an open letter to her mother who had passed away, describing how, when they both knew she was about to pass away, words could not express their love and emotion for each other. Instead her mother had tapped the bed and asked her daughter to ‘lay your head on me as you did when you were a baby,’ just before she died. This inspired the words of the chorus.

Once the song had been written and music composed, the choir recorded the song and video, using funds raised through performances, raffles and a husband and wife pedalathon through Scotland.

Tanya says “I am very pleased with the result and the choir and I love to sing it! We have had such a positive response from people when they hear the song. I feel so enormously grateful to and proud of everyone who has contributed time, money and effort to help us create the single and the video in the name of Harrison’s Fund.”

Tanya goes onto say that “It is such an honour to finally be here releasing the single and video nationally and it really proves the amazing things we can achieve when we set our minds to it. Our aim now is to quite literally raise as much money as possible (through the single release and donations) in order to find a cure before time runs out. So please – help us to reach our goal by donating, and thank you in advance for caring!!

You can download the song by visiting https://song4harrisons.bandcamp.com All proceeds from the sale of the single will go to Harrison’s Fund. Direct donations to Harrison’s Fund can be made on:  https://giving.harrisonsfund.com/pf/Song4Harrisons

Alive & Kickin’ Community Choir meets every Monday from 7pm-9pm at the Muse in Brecon and is for anyone who enjoys singing. They always welcome new members who would like to feel uplifted and inspired through the power of singing.