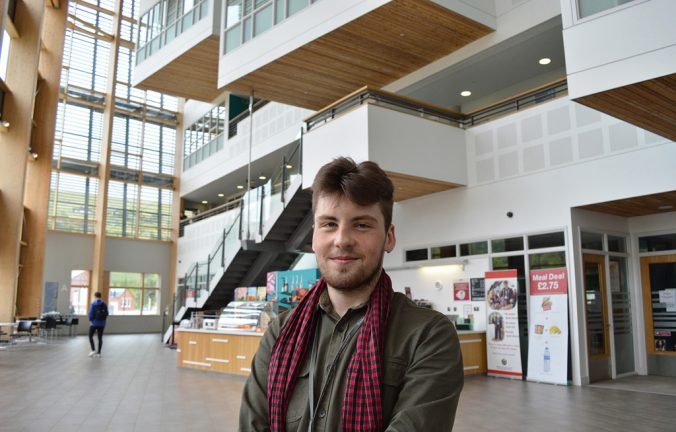 As the New Year of 2015 began, Kyle Eldridge was facing the reality of finding somewhere to sleep by himself in Abergavenny. Kyle, who is 21 in January and registered as having Autistic Spectrum Disorder (ASD), had no options available. Nearly 3 years on, his life has undergone a revolution. He now lives independently, is studying at Coleg Gwent and has achieved several awards as a result. Here is his story in his own words.

“It felt like my life was over. My home life was terrible and I didn’t have any hope. I just used to be in my own little world at times. I experienced a breakdown in general and was hospitalised, and made the decision to move to Abergavenny when discharged.

Two close family relatives were in the area and had been told about Gateway Church through those people. When I was still broken the members had heard of me and were looking out for me through prayer.

When I arrived in Abergavenny I was still in a bad way and was very difficult to look after. It changed for me when I had nowhere to go. Monmouthshire County Council helped me get accommodation in a short space of time and this was my miracle. When I inspected the flat I had only a few items when I started my tenancy, but I was bringing my new faith, which gave me a sense of reconstruction. In trying all ways of life, I found the thing that I was missing and that was God’s love – I had to grow fast to not be extinct. Many different organisations were supportive and provided the encouragement I needed to move forward.

Following the help and underpinning of those nearby, I made the decision to go to college. From that year I won a student excellence award. I have also won an award for my work outside of college serving the community.

I use public transport most of the time, but by whatever means of travel, I am determined nevertheless.

In having recognition from every direction, it really makes me determined and passionate to keep going in the right direction of life. In saying all this, it has come at a cost and the cost being near collapse but it was worth it”.