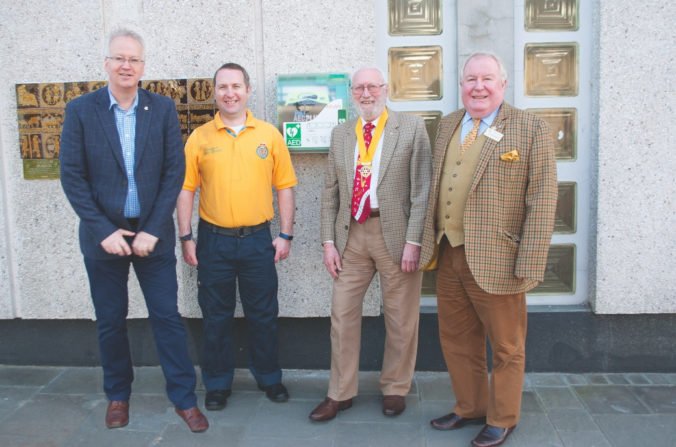 Just days after its official commissioning, a defibrillator in Abergavenny Town centre was used in a real life-saving drama.

The Rotary Club of Abergavenny has fitted four lifesaving defibrillators throughout the town during the last eight months as part of the clubs ongoing ‘Well Being’ Initiative. On Saturday evening, a woman collapsed with a suspected heart attack in the town’s Post Office Square and a passer by raised the alarm. An off-duty fireman and a doctor came to the rescue and used the new defibrillator on the woman who was rushed to hospital by ambulance.
“This totally justified our efforts to provide this facility,” said Rotarian Martin Phillips who led the initiative to supply the defibrillators. “And it also showed that people have to be taught to use them as well.
“While the defibrillators are easy to use and have the latest technology that talks the user through the actions required to safely use the unit, we are now organising training sessions for local retailers to learn how to confidently use the defibrillators as well as other life saving techniques.”
The initiative that started last year with a number of Infant CPR training sessions was such a success that the Rotary Club was keen to continue the programme. The defibrillators have been placed in four locations throughout the town, they are:
The corner of WH Smiths and Cibi Walk
The Post Office building, at St Johns Square
The Town Hall (Just in the archway entrance to the Market Hall)
Outside the Citizen Advice Bureau in Cross Street.
The training sessions will take place at the Angel Hotel on the 10th & 24th of May, and are initially open to town shopkeepers and staff. The training sessions are free of charge and while initial numbers are limited, if they prove successful, the Rotary Club is committed to hold additional sessions later in the year. Any shop owners & staff wishing to attend should contact Rotarian Martin Phillips by email at razzelcam@me.com, stating which date they would like to attend, and providing their names, contact details and email addresses.
Rotarian Martin Phillips wanted to specifically thank Andrew Lewis from the Welsh Ambulance Service, Iestyn Gwillim from Spartan Electrical, a local electrician who fitted two of the defibrillations without charge. He also wanted to thank William Griffiths at the Angel Hotel for kindly offering the venue for the training sessions, Spencer Shankland from Domestic Electrical Solutions and James George from Royal Mail for their help.
The lady was later taken to Nevill Hall Hospital. Martin Phillips said “We are all very proud that the equipment the Rotary Club has donated to the town has been put to such good use (although you hope its never needed)