It is now better known as the site of the National Botanic Garden of Wales, but Middleton Hall was once a magnificent mansion with one of the finest waterparks in Britain. Its story begins in the early 17th century when the Myddleton brothers were making a fortune from the spice trade. By 1670, the house was big enough to justify 17 hearths. But it was in the late 18th century that a wealthy banker and merchant made the most visible mark on the estate. William Paxton was just back from the East Indies. Middleton was for sale. Paxton snapped it up. Not content with modernising the house in the neo-classical style, the new mansion had water closets supplied from a roof top cistern, fed by a reservoir built on the side of a nearby hill. This was an innovative feature at the time, and few country houses in Wales could boast such technology. 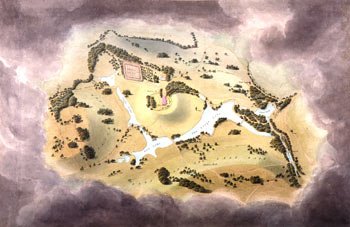 During his 35 years at Middleton Hall, Paxton oversaw the transformation of the parkland overlooking the Tywi valley. He created a chain of lakes and waterfalls with bridges and sluices linked by carriage ways and gravelled footpaths. Close to the mansion, a three-acre double walled garden contained a grape house, peach house, hot house, gardener’s house and shed, orchard and a melon ground. Near by was an ice house and two bath houses.

The hall itself was destroyed by fire in 1931. The county council ,which bought the estate, drained the lakes, demolished the mansion and divided the land into a series of smallholdings. In the 1980s, Dyfed County Council restored some features, planting more than 1,000 trees, renovating crumbling bridges and restoring waterfalls. Since then the first stage of a £6.7million plan to uncover the origins of Middleton Hall’s 568-acre estate got the green light in 2014. It includes major archaeological work intended to reveal how the estate looked from the time of Shakespeare and to restore the Regency waterpark.

“This project will enable us to tell an incredible story of pirates, plague and plants for health,” says Rob Thomas, The Garden’s Head of Development. “It plots 250 years of international trade from the times of barter to the forging of the blueprint for modern capitalism.”

Rob Thomas’s talk on Middleton Hall in the Borough Theatre on January 19th starts at 7.30pm. Non-members may join on the night.