The Gunter Mansion in Cross Street, Abergavenny, is a Grade 2* listed building that has an important place in the history of Abergavenny, and in the story of Catholicism in post reformation Monmouthshire.

Yet visitors to the town, and even those who have lived here for many years, may have no idea of the significance of the building. It has been sub divided into shops, all on the ground floor, and you have to raise your eyes to the first floor to see the ‘blue plaque’ that tells a tiny part of this building’s history. 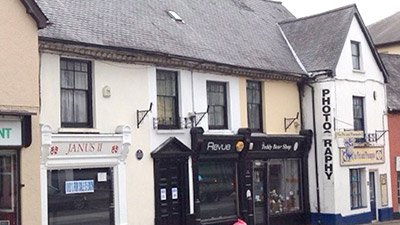 The front aspect of Gunter Mansion

The Gunter family was a wealthy one, and owned land and houses in and around Abergavenny in the 16th century. Following Henry VIII’s decision to split from Rome, Catholics in the 16th and 17th centuries could be prosecuted, imprisoned, or even executed simply for being Catholics. Many families were torn between adhering to the ‘old’ Catholic religion and following the new, Protestant, one. The Gunter family was one of these. Thomas Gunter was a devout Catholic, and his wealth allowed him, for many years, to carry on supporting the Catholic religion through holding ‘secret’ masses in the attic of his mansion on Cross Street.  Fr David Lewis was one of the priests who would regularly preach mass here – with hundreds of local people packed into the small attic chapel – and in 1679 he was arrested and put to death. In 1970, he was canonised by Pope Paul VI and is now St David Lewis, one of the last Welshmen to be made a saint and martyr.

The building on Cross Street also has a fine plaster ceiling from the 17th century and, when it was undergoing building work in 1908, revealed a host of other secrets, including documents, legal papers, and a fresco that is now in Abergavenny Museum. 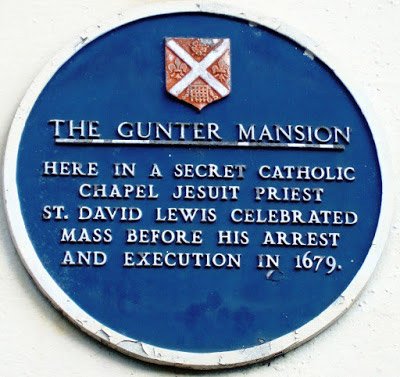 Sadly the building has been allowed to deteriorate and is now in a very poor state of repair. Amanda Peters, who used to run a sweetshop there, (the Pot and Pineapple) was amazed to discover some of this history, and determined that something should be done to try and save the building for the town, and to help regenerate this rather sad part of Abergavenny. As a result, the Welsh Georgian Trust got involved and, after many years of patient negotiation, there is now an agreement in place for the sale of the building to the Trust, providing the purchase price can be raised.

The Abergavenny Civic Society, as well as the Abergavenny History Society, have long been concerned about the building and are both very supportive of the work to purchase and restore the whole premises.

A recent Crowdfunding bid campaign raised over £8,000  and attracted interest from across the UK, and internationally. Applications to a number of trusts and foundations have been submitted and the Chair of the Welsh Georgian Trust, Andrew Beckett, is hopeful that they will soon be able to purchase the building. After this will begin the long process of discovering more about this remarkable piece of Abergavenny history and, together with local people, ensuring that it is restored in a way that adds to the character of the town, and capitalises on the potential for heritage tourism.

The Gunter Mansion project is eager to talk to anyone who has an interest in this work, would like to donate, or who just wants to keep up to date with progress. Please e-mail info@thegunterproject.org.uk for more information. You can also check out the www.welshgeorgiantrust.org.uk for more details. There is a Facebook page; www.facebook.com/GunterMansionAbergavenny/ and a Twitter account @thomas_gunter

The history of this remarkable, currently unloved, building is of interest across the world – please help spread the word to friends and relatives, and let’s see this part of Abergavenny brought back to life!