History of The National Eisteddfod of Wales

The National Eisteddfod is the largest and oldest celebration of Welsh culture, unique throughout Europe as each year it visits a different area of Wales. Eisteddfod literally means a sitting (eistedd = to sit), perhaps a reference to the hand-carved chair traditionally awarded to the best poet in the ceremony ‘The Crowning of the Bard’. 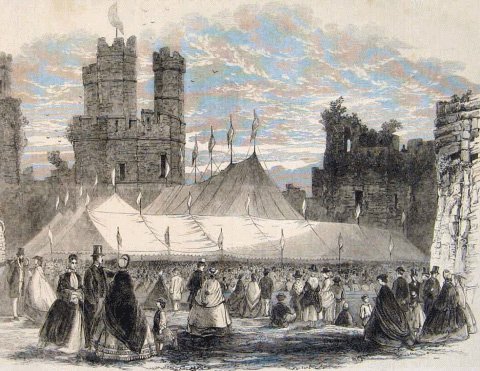 The National Eisteddfod of Wales dates back to 1176 when it is said that the first Eisteddfod was held. Lord Rhys invited poets and musicians from all over Wales to a grand gathering at his castle in Cardigan. A chair at the Lord’s table was awarded to the best poet and musician, a tradition that continues today in the modern Eisteddfod.

Following 1176, many eisteddfodau were held throughout Wales, under the patronage of Welsh gentry and noblemen. Soon the Eisteddfod developed into a huge folk festival on a grand scale. After declining in popularity in the 18th century, it was revived in the early years of the 19th. In 1880 the National Eisteddfod Association was formed and since then the Eisteddfod has been held every year, except for 1914 and 1940.

The Gorsedd of Bards (Gorsedd y Beirdd) made its first appearance at the Eisteddfod at the Ivy Bush Inn in Carmarthen in 1819, and its close association with the Festival has remained. It is an association of poets, writers, musicians, artists and individuals who have made a significant and distinguished contribution to Welsh language, literature, and culture. Its members are known as Druids, and the colour of their costumes – white, blue or green – is indicative of their various ranks.

The head of the Gorsedd of Bards is the Archdruid, who is elected for a term of three years, and is responsible for conducting the Gorsedd ceremonies during Eisteddfod week. These Ceremonies are held to honour literary achievements amongst Welsh poets and prose writers.

Three Gorsedd ceremonies are held during the Eisteddfod week:

During these ceremonies the Archdruid and the members of the Gorsedd of Bards gather on the Eisteddfod stage in their ceremonial robes. When the Archdruid reveals the identity of the winning poet, the ‘Corn Gwlad’ (a trumpet) calls the people together and the Gorsedd Prayer is chanted. The Archdruid withdraws a sword from its sheath three times. He cries ‘Is there peace?’, to which the assembly reply ‘Peace’.

Then the Horn of Plenty is presented to the Archdruid by a young local married woman, who urges him to drink the ‘wine of welcome’. A young girl presents him with a basket of ‘flowers from the land and soil of Wales’ and a floral dance is performed, based on a pattern of flower gathering from the fields. The Gorsedd ceremonies are unique to Wales and the National Eisteddfod.

As well as the traditional ceremonies there is another side to the Eisteddfod: maes yr Eisteddfod, the Eisteddfod Field. Here you find lots of stalls associated mainly with crafts, music, books and food. Music competitions and radio shows take place in the Theatr y Maes( the theatre on the field). There is also a societies tent, a literature tent and the very popular live music tent – only songs in Welsh can be performed. The learners tent is for teachers and students of the Welsh language.

There is also an Eisteddfod held twice a year in the Chubut province of Patagonia, South America, in the towns of Gaiman and Trelew. This Eisteddfod started in the 1880’s and includes competitions in music, poetry and recitation in Welsh, Spanish and English. The winner of the best poem in Spanish receives a silver crown. The ceremony to honour the best poet in Welsh, the Bard, involves a religious ceremony asking for peace and health and involves the Chairing of the Bard in an ornate carved wooden chair. The main Eisteddfod at Trelew is a very big gathering with visitors from all over the world.