To reach the other end of Trinity Street in Abergavenny, Mike Langley has walked all the way round Wales. 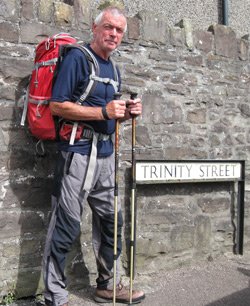 Whilst Offa’s Dyke has been there for thousands of years, the Welsh Coastal Path has only  just opened.  When Mike retired from the licensed trade, he was the landlord of the famous Goose and Cuckoo in Upper Llanover for ten years, he decided that it was time to see more of Wales. Mike said “I’d just got my bus pass, but thought that walking would be rather more fun than getting the bus all the way round.”

Some of the journey was fun, some very hard work. A total of 1,047 miles is rather longer  than the official distance, but diversions for supplies and the occasional navigational hiccup added more. Mike isn’t the first person to do the whole route, the first was a runner, but Mike walked without supporting vehicles, carrying all his own kit, and sleeping outside in his tent for fifty one nights. And having a bus pass certainly makes him the first person over sixty!

Perhaps a much bigger problem than distance was the weather, the worst recorded summer meant rain, and more rain. Many footpaths were muddy, and some almost streams.  Sometimes he was so tired that he hardly noticed that he hardly noticed how wet the sleeping bag was. What made up for it was the support and encouragement from people along the way, who encouraged camping, helped dry clothes and sleeping bag.

Mike commented “ It was really a great experience, though maps were needed to help the signage, and some of the footpaths just weren’t up to the terrible weather. But looking back, I’m delighted to have made it, and the folk we met could not have been more friendly and helpful.”

The opening of the Coastal Path from Chepstow to Chester was the result of co-operation between the Welsh Assembley, councils and ramblers bodies, and is widely acclaimed for its contribution to tourism, and promotion of Wales.