Our monthly columnist shares her baking secrets with recipes just like Nana used to make. This month: Nana’s Bread Pudding 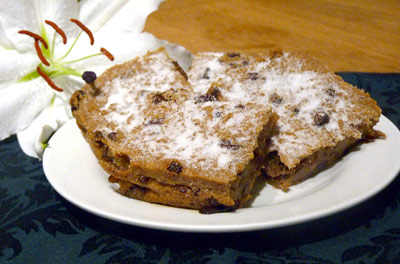 This is a delicious way of using up stale bread, however not to be confused with bread and butter pudding which is usually served as a dessert. This recipe was handed down from my Grandmother as it was a great favourite during rationing, making meagre allowances go further. Over the years I have adapted it, adding extra spices.

The quantities below are very much a guide as this recipe is not an exact science, I rarely measure anything! – do have a try.
Heat oven to temperature Fan150° /320° F or Gas 2/3

Soak bread in water for 5-10 mins.
Drain into a colander and squeeze out as much excess water as you can.
Put squeezed bread into a bowl and mix in all other ingredients until well mixed.
Spoon into prepared tin.
Bake in oven for approx 1 hour until nicely browned, springy to touch and the pudding has come away from the sides of the tin.
Cool in tin, sprinkle with caster sugar and cut into squares.