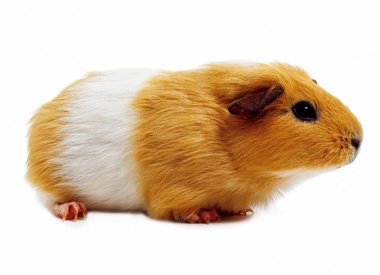 Children’s pets are a landmark in their young lives and the first real object of responsibility they will have owned.   This introduction to the joy of pet ownership is why I recommend a guinea-pig as a great choice for first timers.

I was very kindly given some young guinea-pigs, pups as they are known, to be given to my kids for Xmas.  The plan was perfectly set with the guinea-pigs safely housed at the practice pre-Xmas.  They were beautifully castrated by Mr. Nick Hooton – guinea-pig emasculator extraordinaire – at Abbey Vets and the hutch was constructed in next-door’s garage for ‘Santa’ to pick up on his way through Gwent.  Thanks Evan.

However, disaster nearly struck on my daughter’s birthday two days before Xmas when she was bought a Zhu Zhu pet.  These fluff covered pieces of plastic, pretend guinea-pig imposters (made in China;   a country with a very poor guinea-pig rights record) tried to usurp our real, living, breathing guinea-pigs from the top of Santa’s list.  However, our fears were misplaced because as soon as she saw them in their hutch (they were too wriggly to stay in the wrapping paper) and then introduced to the fantastic interactive properties of real, living, poo-ing, Guinea Pigs – immediately David and Daisy (I know they were boys but who says guinea-pigs need conform the traditional gender labels?), order was restored on Xmas day.

Now as February beckons, the Zhu Zhu pets are sitting in their rightful place at the back of the toy cupboard while Dave and Daisy the guinea-pigs crap all over my lounge carpet.  In my daughter’s words, “The best present ever, Daddy.  Ever, ever.”