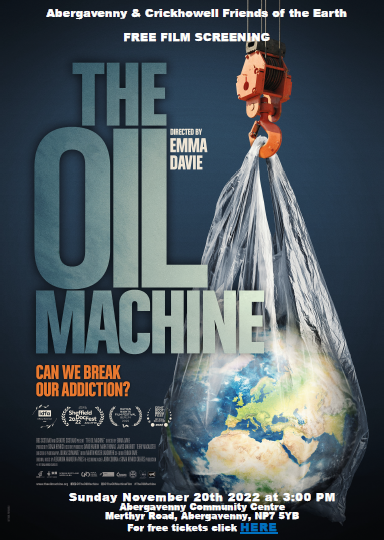 Abergavenny and Crickhowell Friends of the Earth present the second film in their season of films about the climate emergency.

The film, produced by Emma Davie for BBC Scotland  and premiered at the Sheffield Docfest in 2022, explores our complex relationship with the oil industry, set against the backdrop of the ongoing fight for North Sea reserves.
From the discovery of huge oil fields off the coast of Scotland to their mass privatisation during the Thatcher era, The Oil Machine highlights how oil became the invisible engine driving UK economic and public policy. In the wake of COP26 in Glasgow, the timing of this film’s release is a spotlight on the urgent demand for climate action as public anxiety and the pressure on both oil companies and the government continue to mount. Bringing together a wide range of voices, from industry executives and economists to young activists, this documentary presents a thought-provoking investigation into how this insidious oil
machine might be dismantled.
With only five to ten years to control our oil addiction and dramatically reduce carbon pollution, oil companies still try to persuade us that they can carry on drilling while keeping to Net Zero ambitions through adopting new technologies, such as Carbon Capture. But climate scientists are deeply sceptical of the Net Zero concept and the time it would take for
these technologies to be effective.