When a speaker is good, no-one wants him or her to finish, and that’s what happened at November’s monthly meeting of Gilwern U3A when Richard Walker spoke on ”Faith in Prison.”  Fascinating facts and figures illustrated the concept of incarceration from William the Conqueror’s Tower of London up to modern Norwegian prison cells, which looked more like desirable bedsits!

In the 18th century, prison overcrowding was eased by deportation to Australia, Tasmania and America, but that’s no answer to today’s ever-increasing prison population.  After many questions, the audience left with a better understanding of the frustrations of many in the judicial system.

December’s meeting on the 12th will be a social event with singing and a light-hearted quiz topped up with seasonal fare.  To add a touch of spice, quiz teams from Crickhowell and Abergavenny are rumoured to be joining the afternoon’s events so friendly local rivalry will be in evidence.

And so to 2019, when January’s meeting on 16th is by Malcolm Meadows talking about “William Walton and the Gardens of Ischia” – a total change from prison reform.

All monthly meetings of Gilwern U3A are held in the Community Centre, Common Road, Gilwern and start at 2pm.  It is possible to join Gilwern U3A on the day, with the annual subscriptions of £15.00 being slashed to only £7.50 for membership up to the March 2019 meeting, ensuring an entertaining and fascinating year. The benefits of belonging to Gilwern U3A are open to all retired, semi-retired persons and those no longer looking after families.   Non-members are always welcomed to the monthly meetings and will be charged £2.00 per head.  For full details of Gilwern U3A visit the website on www.gilwernu3a.org.uk.   END

Abergavenny University of the Third Age

If you’re retired and have a thirst to learn about anything from Architecture to Circle Dancing, the Abergavenny U3A could be for you! The British University of the Third Age was first established in 1981 and quickly became popular. It is a national organisation, but each local U3A is independent and shares a common purpose, […] 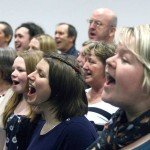 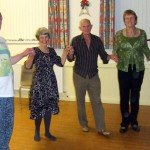 Circle dancing is a sociable and enjoyable way of exercising as Hilary Jay explains. Here at Abergavenny circle dancing we dance to live music and learn international dances including dances from Greece, Macedonia, Serbia and Israel. It is invigorating, yet relaxing while appreciating the authentic music played by experienced musicians Tony, Nick and Richard.  The […]