Room author, Emma Donoghue, returns with her new novel The Wonder, a historical novel with a premise which is equally interesting and extremely atmospheric. It is a story riddled with secrets, superstitions, faith, rituals, myth and tradition. 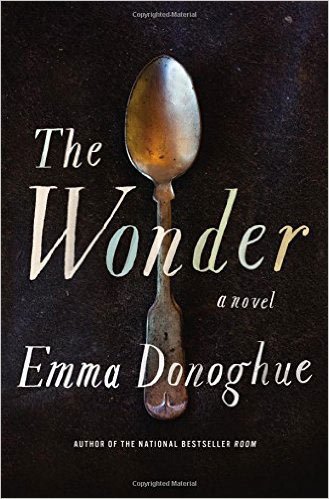 The novel is set in 1859 in the Irish hamlet of Athlone. Eleven year old Anna O’Donnell celebrates her first communion in April. Once she has accepted the host, she refuses to eat any food for four months claiming that God is providing her with ‘manna’. She will drink mere spoonfuls of water. Word of Anna’s fast spreads wide and far so pilgrims and townsfolk come to the O’Donnell’s cabin to pray with and meet a “future” saint and gladly leave donations in a box by the door.
Others in the community suspect chicanery by the family or the Church because no person could live so long without someone sneaking her food. A commission hires two nurses for two weeks to sit with Anna and record all that they see. One nurse is Sister Michael from the House of Mercy. The other is Elizabeth (Lib) Wright, an Anglican Englishwoman who trained with Florence Nightingale and served with her in the Crimea. Lib considers herself superbly trained and superior to the superstitious, ignorant Irish. She remains aloof and clinical throughout the first week, but suddenly Anna begins to fail. She is displaying acute symptoms of starvation: loss of hair, bleeding gums, peach fuzz on her face, bruises, and jaundice. Lib is desperate to save the child, who has become more than a patient to her, but how?

As she did in her novel Room, Donoghue builds the tension to a breaking point. The reader feels helpless, conflicted, hopeful and resigned all at the same time. Must we depend on Divine intervention or will one woman’s courage to abandon her career, her heart and perhaps her soul save the child? The Wonder proves itself to be a feast for any reader.