Since moving to Abergavenny just over a year ago, I’ve firmly held the view that there’s something rather special and a bit magical about our town that attracts interesting and intriguing people who want to come and live here.

I met Lionel Elton by chance, in one of our local shops, and we got chatting. The next day, Lionel invited me to his house for soup (a secret recipe of his that I’m not sure he’d want me to reveal) and a promise that he’d be guinea pig for our regular column ‘Focus on People.’

Funny the people you meet, and the stories they have to tell, isn’t it? Lionel was born and grew up in Cardiff, attending Cardiff University before he moved away to live in London and later in Buckinghamshire for a number of years. He holds the impressive accolade of being the first ever principal clarinettist in the National Youth Orchestra of Wales which was first formed in 1945. In fact, the Orchestra was the first national youth orchestra in the world. Lionel then went on to become the musical director of the London Chamber Music Society while juggling a successful career in the computer industry, and continues to teach music today. To say he’s nifty with the clarinet would be an understatement, although after an unfortunate accident in Snowdonia where he was left with a broken jaw, he turned his attention towards the saxophone.

Lionel picks up one of his saxophones. ‘Do you recognise this tune?’ he asks me. The music room in his home is instantly filled with the smooth sound of jazz. I shake my head, embarrassed at my own ignorance. ‘No?’ he asks. ‘What about this?’ Again no. ‘You must know this one, surely,’ he says with a wink, and plays a jazzy version of God Save the Queen. ‘Yes I know that one at least,’ I smile. 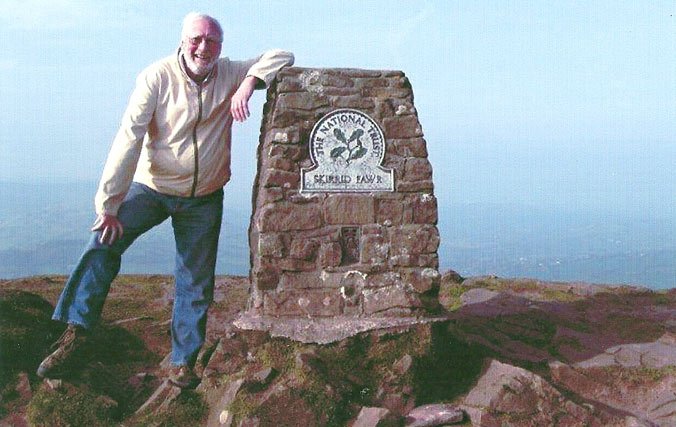 Lionel atop the Skirrid

If music is one of Lionel’s greatest loves, it is closely followed by his passion for drama. While living in Amersham with his late wife, Lionel was very actively involved in a number of drama productions, namely with the Bovingdon Players. In 2007 he took on the challenging role of directing, as well as acting, in Shakespeare’s King Lear. For Lionel, King Lear is Shakespeare’s greatest tragedies and, as it marked Lionel’s final directing role, Lear represented the final piece in the jigsaw.

Over a delicious bowl of tomato soup, I quiz Lionel on how he happens to live in Abergavenny. ‘I’ve always wanted to move back to Wales,’ he explains. ‘I’ve always felt a tremendous pull to return and so in 2010, I did.’
‘But why Abergavenny?’ I ask. ‘What is it about here?’  There are three good reasons. One: to be near family. Two: to enjoy the scenery. Lionel loves the fabulous mountain walks that our area provides – he can regularly be found scaling the Skirrid (when the sun shines!) Three: because Abergavenny is a thoroughly honest town without pretensions. ‘There’s such a lively community too,’ comments Lionel, who is an active member of the Rotary Club and has just become involved with the Citizens Advice Bureau. ‘For a relatively small town, there’s certainly a lot going on and plenty of wonderful people to meet’…I couldn’t have put it better myself!