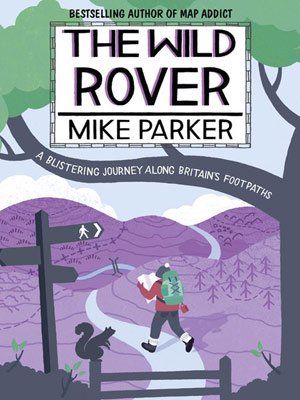 The end of this month sees the ever popular Crickhowell Walking festival enter its 5th year, I thought it apt to introduce you to ‘The Wild Rover – A Blistering Journey along Britains Footpaths’ by Mike Parker (bestselling author of ‘Map Addict’)

The Wild Rover offers an intelligent, provocative, opinionated and witty exploration of a passionate British subject – Footpaths and our rights of way. Examining their chequered and surprisingly turbulent history, from the Enclosures Acts of the eighteenth century to the 1932 Mass Trespass on Kinder Scout in Derbyshire; and from the hard-won post-war establishment of great National Trails like the Pennine Way to the dramatic latter-day battles by the likes of Nicholas van Hoogstraten and Madonna to keep ramblers off their land.

The story ranges far and wide, to all corners of the country, and is filled with the many characters that Mike engages with along the way – the poets and artists, farmers and ramblers, landowners and Rights of Way officers and campaigners, historians, archivists and anyone else who crosses his path (or even tries to block it).

Walking is becoming an ever popular pastime and as Mike notes, footpaths offer democracy at its most fundamental, open to all, where you don’t have to pay in, and they will take you as far as you could possibly wish to go.  All you need are a pair of feet and the urge to use them.
The Wild Rover is a must for all those dusting down their walking boots and hoping to explore more of our glorious countryside.